Biochar and its potential in Canadian forestry

Throughout the boreal forest region and indeed much of Canada, fire is the primary natural “disturbance agent” — the means by which older forest stands are naturally replaced by younger stands.  The situation immediately after a fire can appear quite unpromising: charred remains of canopy trees and loss of understory vegetation, including regenerating trees.  However, an observation familiar to many foresters is that post-fire stands “green up” remarkably quickly.  A few years after a moderate-intensity fire, understory vegetation is generally thick and future canopy trees are growing vigorously.

A number of processes contribute to post-fire regeneration and rejuvenation.  Many tree species show adaptations to survive fire events (e.g., thick insulating bark, high belowground storage), or to regenerate by seed following fire (e.g., the serotinous cones of Jack Pine).  In addition, nutrients previously stored in living parts of trees have been released into the system, and soil temperature is increased by a reduction in litter.  However, something much less obvious also contributes to post-fire forest rejuvenation: namely, a phenomenon that has been termed the “charcoal effect”. In experiments in the 1990s in Scandinavia, additions of charcoal to soils were shown to increase nitrogen uptake and growth of some trees, and result in a proliferation of understory vegetation.  Some fern species would only establish where charcoal was present.  An initial hypothesis of the main mechanism responsible was the capacity of charcoal to absorb growth-inhibiting phenolic compounds associated with the leaf litter of certain understory species, in particular Ericaceous shrubs (blueberries and their kin).  Early research also showed that charcoal strongly impacts a variety of soil processes, resulting in increased litter decomposition rates, increased soil pH, and increased availability of nitrogen and cations such as calcium and magnesium. 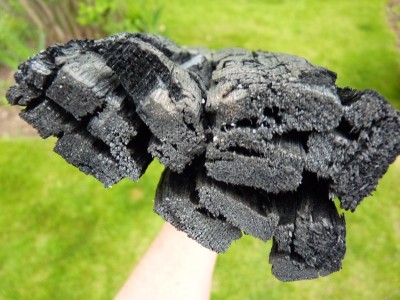 In the last few years research interest on charcoal in soils has veritably exploded.  A major motivation stems from the long persistence of charcoal in soils.  Wood chips added to soil decompose within a few years, and the half-life of larger logs is often only 20-25 years.  In contrast, 90%+ of charcoal remains present for at least 100 years, and a large portion is likely to be present for 1000 years or more.  This longevity is of great interest in terms of carbon “sequestration”.  Charcoal is >95% carbon, and diversion of organic waste material from agriculture and forestry into charcoal on a large scale could in theory be an important mechanism to remove carbon from the atmosphere and store it in a form that will remain put for a long period of time.  Unlike other proposed types of carbon “capture”, addition of charcoal to soils has considerable potential to have additional beneficial effects that have nothing to do with climate change.  The term that has emerged for charcoal intended for use as a soil amendment is “biochar” (Fig. 1), with the “bio” referring to its biological source.  Biochar as a climate mitigation strategy has recently been promoted by the likes of Al Gore, James Hansen, and James Lovelock.

Complete combustion of wood, as occurs under high oxygen conditions, produces wood ash as an end product.  Wood ash is generally very alkaline (pH 9-13), and depleted in lighter elements such as nitrogen.  Although there are cases in which wood ash has been used for agricultural liming, it is generally not beneficial as a soil amendment to enhance tree growth.  Pyrolysis is the thermal decomposition of biomass under low oxygen conditions; it is a chemical reaction that one would recognize as a kind of smoldering fire.  Although simple to initiate, pyrolysis is a complex chemical process.  The main chemical products of wood pyrolysis include syngas (composed of hydrogen gas, carbon monoxide, and a variety of gaseous carbon compounds, especially ethylene and methane), pyrolysis oils (heavier organic molecules that are liquid at room temperature), and charcoal.  Wood vinegar, consisting of recondensed water and water-soluble organic compounds including acetic acid and acetone, may also be produced.  Pyrolysis has been around a long time as an industrial process: some types of “town gas” produced during the gaslight era were essentially pyrolysis-generated syngases.

The chemical and physical properties of biochar vary greatly depending on pyrolysis conditions, such as peak temperature, and also on the properties of the organic matter used as feedstock.  Biochar can be produced at temperatures of anywhere from 250-900°C.  Biochar produced at low temperatures (say <400°C) tends to retain more carbon, and have a lower pH and porosity; higher temperature biochars (say >550°C) retain less carbon and have higher pH and porosity.  Some types of feedstock present problems for producing biochar useful as a soil amendment.  Some animal wastes (such as chicken manure), as well as urban compost sources have quite high levels of salts (sodium chloride and others) that remain present in charred material.  Construction waste material is typically mixed with metals and plastics, and can be expected to produce chars that have unacceptable levels of toxic contaminants.  Contamination concerns are resulting in rapid efforts to develop consistent labeling and quality assurance for trade purposes.  Biochar certification is likely to follow.

The properties of biochars that may result in a beneficial “charcoal effect” remain a topic of considerable research interest.  A number of mechanisms are now thought likely to contribute to beneficial effects on plant growth.  Biochar generally bears a negative charge, and serves as a cation exchange site in soils.  In addition, biochar commonly has a remarkably high surface area, and physically sorbs a great variety of substances, including negatively charged plant nutrient forms such as phosphate and nitrate.  The high surface area of biochar also enhances soil water holding capacity, and its low density will generally reduce soil bulk density and so enhance soil aeration and root penetration.  Some properties of biochar may, however, have negative effects on plants.  Freshly produced biochar may absorb mineral nutrients to such an extent that they are unavailable to plants, suggesting a need to “prime” biochar by adding nutrients.  In addition, recent work has shown that many biochars outgas significant quantities of ethylene, a potent plant hormone with unpredictable and species-specific effects on plant growth and development.

Potential for biochar use as a forest soil amendment

In many respects it is “natural” to consider biochar as a soil amendment in the context of Canadian forestry.  Charcoal is something that naturally occurs in to a greater or lesser extent in essentially all forest ecosystems in Canada.  One can therefore anticipate that native plants and other organisms, in particular soil microbes and fauna, will be able to cope with some level of biochar in the soil.  Adding charcoal to logged stands may better “emulate” natural disturbance.  From current understanding of biochar effects on soil properties, positive effects on forest productivity would be expected in many systems.  Moreover, there is a high potential to create “designer” biochars matched to specific soil types and forest communities.

What benefits are to be expected in terms of increases in forest growth and yield?  At present nearly all published data are from agricultural systems.  A meta-analysis (quantitatively compiling results from numerous studies) published in 2011 found that on average biochar additions resulted in a ~10% increase in crop yields in agricultural trials (almost all conducted in the tropics).  However, if one considers only trials in which soils were acidic and/or coarse-textured, the gains in yield were ~20-30%.  Also, there are other cases in which larger growth enhancements have been documented; moreover, growth enhancement effects can continue for many years after biochar has been added to a soil.

Research trials on tree growth responses in Canada have only been initiated in the last year or so.  Pot experiments examining first year growth responses of a number of Canadian tree species were completed in my lab in October 2012 (Fig. 2).  Results are currently being analyzed for peer-reviewed publication, but it is clear that results are not so clear cut: tree species vary in responses, and both positive and negative responses can occur.  One possible explanation for negative effects is that early tree growth responses may be strongly influenced by ethylene emitted by biochars, but this remains speculative.   Understanding the mechanisms for effects will clearly be critical to developing biochars that maximize benefits and are suited to specific tree species and soils.

Potential of biochar as a forest product

There is considerable popular interest in biochar as a soil amendment, and a range of companies in the US and elsewhere are marketing biochar for horticultural use.  In addition to its potential use for gardens and houseplants, biochar has a number of other important market niches.  The low weight of biochar makes it particularly attractive for green roof and urban forestry applications where minimizing soil mass is important.  The high capacity of biochar to absorb a wide variety of chemicals also has generated great interest in its use on contaminated soils, including industrial brownfields and on mine tailings.  In an agricultural context, biochar may be best considered a substitute for lime: biochar commonly has a liming potential much greater than dolomitic limestone, and is expected to continue to reduce soil acidity over a much longer time.  This specific product substitution may also be important in a forestry context: in Ontario the most common forest soil amendment has been lime added to acidified soils in sugar bush operations.  Biochar has an additional potential advantage in that it can be directly valued in terms of sequestered carbon.

Wood fiber is generally regarded as a superior feedstock for biochar production.  Other feedstocks, in particular animal wastes and some agricultural residues, commonly result in biochars with less desirable characteristics in terms of element content and properties like porosity.  Wood fiber is also likely to be more uniform and predictable as a feedstock source.   Of course there are many other potential uses for wood fiber in, for example, wood composite products; however, most such applications still result in residues that could be used as a biochar feedstock.

Charcoal production is an ancient technology, and there are a variety of commercial units available geared toward production of charcoal for barbeque-type markets.  Simple “retort” systems, mainly designed for on-farm processing of agricultural waste, can also be obtained.  However, efficient conversion of sawmill waste, in particular sawdust and bark, to biochar, will demand high-capacity purpose-engineered machinery.  Engineering emphasis to date has generally been on pyrolysis products other than biochar, in particular pyrolysis oils, which have important potential as industrial chemical feedstocks.  Integrated systems that efficiently produce a set of products remain an important engineering goal.

Biochar is very likely to emerge as an important new aspect of the forest industry in Canada in the years to come.  An obvious driver initially will be market opportunities for sawmills and other wood processing facilities to turn waste materials into new products that have an added economic value in terms of carbon credits.  Use of biochar as a forest soil amendment is most likely for high-value stands subject to soil acidification, in which biochar may be a cost-effective and more permanent substitute for lime.  Urban forest applications may also be important, as may intensively managed high-input systems, such as hybrid poplar.  The economics of biochar will also depend strongly on the development of carbon markets and regulatory frameworks to encourage climate change mitigation.