Every planter spends countless hours daydreaming ways to improve the activity of planting trees.  During one such session I contemplated how to improve my planting shovel and recalled meeting a knife maker on salt spring island, Seth Burton. I was imagining modifying my existing stock shovel with a handle made of Damascus steel. One of the many downfalls of today’s modern planting shovel is that the handles are prone to failure. Damascus is an ancient form of steel characterized by distinctive patterns of banding and mottling, reminiscent of flowing water. Items made of Damascus are reputed to be not only tough and resistant to shattering, but capable of being honed to a sharp and resilient edge, ideal for knife making.  It was just a few years prior that I had met Seth and was introduced to his exquisite hand forged knives made from Damascus. I bought one as a gift for my tree planting boss. 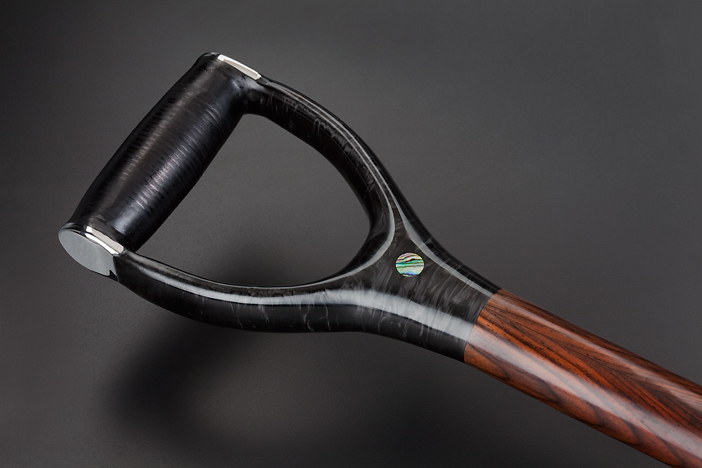 I soon visited Seth on Salt spring Island and sowed the idea of modifying my shovel into the ultimate planting machine. To my delight, Seth was interested.  A shovel is, after all, a type of blade and the idea of making a blade that cut through tough terrain to plant trees motivated him. We decided to work on this project together.

Like a true piece of art the design didn’t occur overnight.  Over several months the design emerged with a blade of Damascus steel rather than the handle.  As we worked, there was an unspoken understanding between us that we were going for the absolute best shovel possible. In the end the only thing we used from the original shovel was the general size and weight.  The final construction is what we consider to be the best tree planting shovel made to date.  In fact it is probably the most beautiful and functional shovel ever made.

The blade and ferrule was constructed out of five types of the highest quality stainless steels, forged and folded over a core of powdered tool steel. The result of this process was a single billet of metal consisting of over 200 layers. Having not made a shovel blade before, Seth drew on his considerable metal smith experience to find the combination of inert hardening and tempering that would produce a shovel blade that was both tough enough to endure repetitive striking against rock and which had high edge retention (capacity to remain sharp).  After mastering the blade we moved onto designing the handle, shaft and fittings. For the shaft, we chose a wood, Cocobolo, known for its strength and weather resistance. Cocobolo has been used for centuries in knife and gun handle construction. The shaft was press fit, epoxied and pinned with a mosaic pin into the ferrule.  The D-handle was constructed with a white oak core and reinforced with stainless steel. A mortis and tenon and stainless steel bolt fastened it to the shaft. The final touch was to wrap the D handle in multiple layers of carbon fibre.  The last stage of the shovel construction was the grip which we formed out of stacked leather with a half inch square stainless tang and bolster.

Two hundred and fifty thousand trees later, the shovel still looks brand new and is valued at over $6000.  Most standard shovels would struggle to last a single season of planting and certainly would not be considered a valuable piece of art.  This shovel will last forever.  Eager to try the shovel, a fellow planter Wahabu Ahmed, renowned for his 19 year tree planting career, borrowed the shovel for a month and attests:

“I got the opportunity to try this shovel at the later part of this planting season and I can say it is the best shovel I have used in my nineteen years of planting. The shovel feels solid and the blade has the best approach angle, which makes it easier to drive through challenging land such as thick grass."

Feats and achievements aside, I humbly suggest the best thing this shovel has done is cultivate a friendship that is destined to grow along with all the trees this shovel has planted.  Thank you, Seth Cosmo Burton.

You can see Seth's knives at www.cosmoknives.com