The Challenges of Active Forest Management in an Ecological Reserve

Originally published in The Forestry Source, September 2013. © 2013, The Society of American Foresters.

When your Habitat Conservation Plan (HCP) requires the accelerated development of a second-growth forest into a late-successional forest, that’s a tall order, especially when there isn’t an established silvicultural prescription to create such a forest structure. But when your prescriptions call for thinning in a landscape that is designated as an ecological reserve and your stakeholders—who include the state’s Sierra Club chapter, a City Council, tribes, and the public—support your management strategy, you must be doing something right. In Seattle Public Utilities’ (SPU) Cedar River Municipal Watershed, silviculturist and SAF member Rolf Gersonde, along with members of the agency’s Forest Ecology Work Group, are at the center of a demonstration project showcasing how active forest management and stakeholder involvement are helping to meet the watershed’s ecological objectives of delivering quality drinking water and ecosystem services.

Two-thirds of the drinking water used by 1.4 million people in the Seattle metro area comes from the Cedar River Watershed, which spans 90,638 acres in the foothills of the Cascades in Washington State. More than 80 percent of the watershed was logged during 20th century, with the last harvest done in 1995; since 1900, annual harvests averaged nearly 60 million board feet. Now, less than 17 percent of the area remains unharvested, with the rest being second-growth forest of various ages. Douglas-fir and western hemlock forests of 50 to 90 years old cover much of the watershed’s lower elevations, while western hemlock and pacific silver fir of 20 to 50 years old are found in the upper elevations. 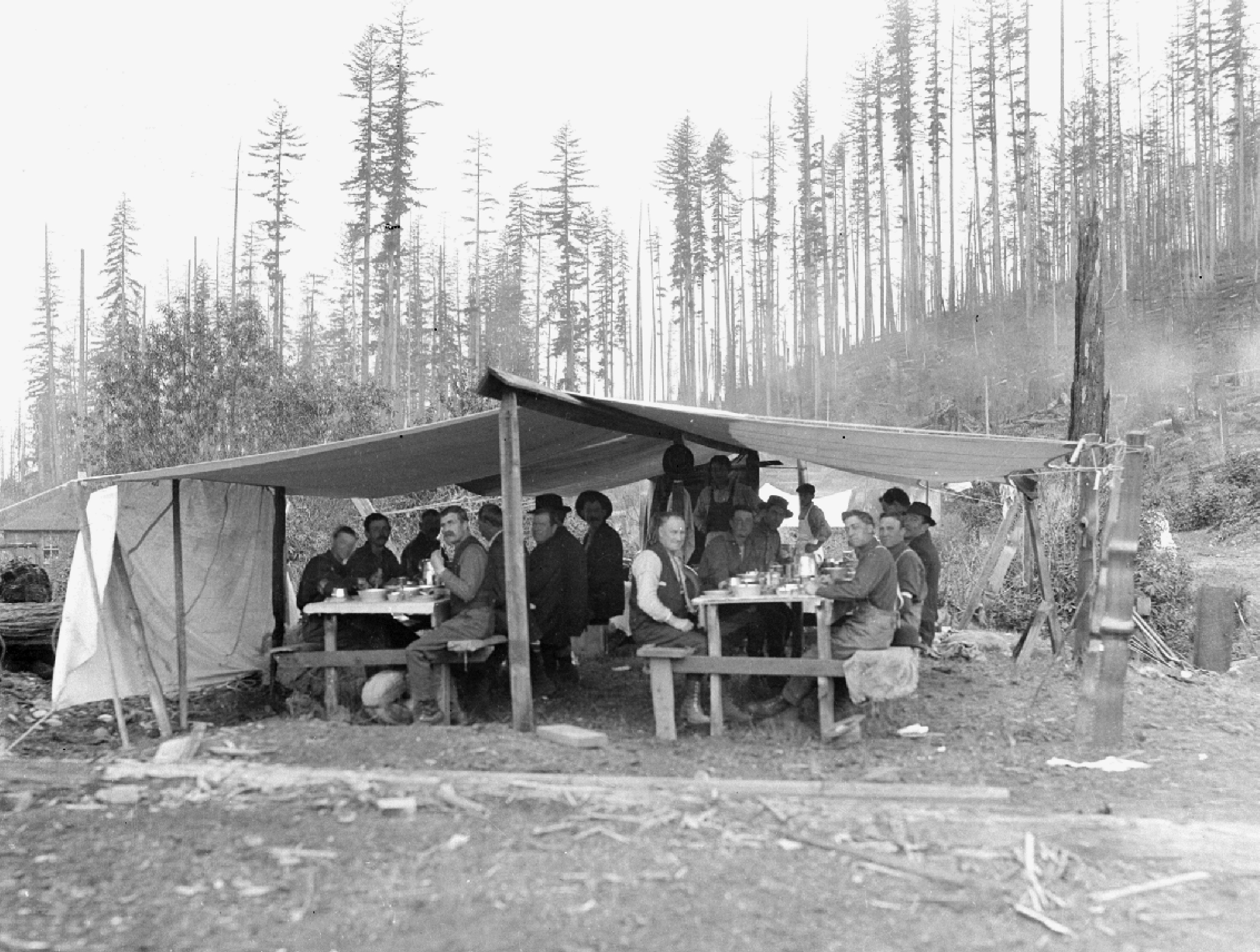 Through a series of land transfers over the years, the city became the sole owner of its watershed lands in 1996. With the anticipated listing of Chinook salmon as an endangered species, SPU began work on the Cedar River Watershed Habitat Conservation Plan (HCP) in 1993, as the diversion of water from the Cedar River was recognized as impacting the salmon.

Timber harvesting has occurred on about 83 percent of the 90,000-acre Cedar River Municipal Watershed since 1900. Areas shown in blue are old-growth stands. Image credit of Seattle Public Utilities.

When in 1996 Seattle’s citizens were presented with the draft HCP that proposed funding the HCP through revenues from commercial thinning timber, Gersonde said that they argued instead for setting aside the nearly 85,500 acres of second-growth Douglas fir and late-successional forest as an ecological reserve, effectively prohibiting commercial timber harvesting for the purpose of generating revenue. To fund the HCP, the public agreed to pay higher water rates instead. Thinning, however, was still needed.

When he joined SPU in July 2004, Gersonde was immediately thrust into the intense stakeholder process of implementing the HCP’s ecological thinning program. In addition to the primary forest management goals of protecting and restoring biological diversity and protecting water quality, the HCP called for “accelerating the development of late-successional forest attributes in second-growth forest, improving habitat for species of concern that depend on late-successional forest.” Accelerating this development would be accomplished through restoration thinning of the younger stands to adjust spacing, reduce competition, and increase species diversity; the ecological thinning in the older stands would create more structural diversity within the canopy and accelerate the growth of understory vegetation.

Although the public isn’t receptive to logging, the thinning of young stands isn’t controversial. “But when we get into thinning older forests to introduce a second cohort and create greater canopy heterogeneity,” Gersonde said, “people have questions about that, about whether or not this is necessary, given that our expectations for forest stand development patterns are such that eventually, no matter what we do, we anticipate that there eventually develops an old forest structure anyway.”

To gain support for the ecological thinning of the older stands, Gersonde explained that they conducted one thinning operation without the stakeholders’ involvement to demonstrate what the pre- and post-thinning would look like. For the succeeding projects, they involved the stakeholders by holding workshops, conducting field trips at the thinning sites, and discussing the benefits of thinning. One of these ecological thinning sites was the 700 Road project that spanned 2006 through 2008. In this area, stands of mostly western hemlock with some Douglas-fir with a pre-thinning 190 to 350 trees per acre were thinned to 140 to 280 TPA (from 330 square feet per acre to 250 square feet per acre). 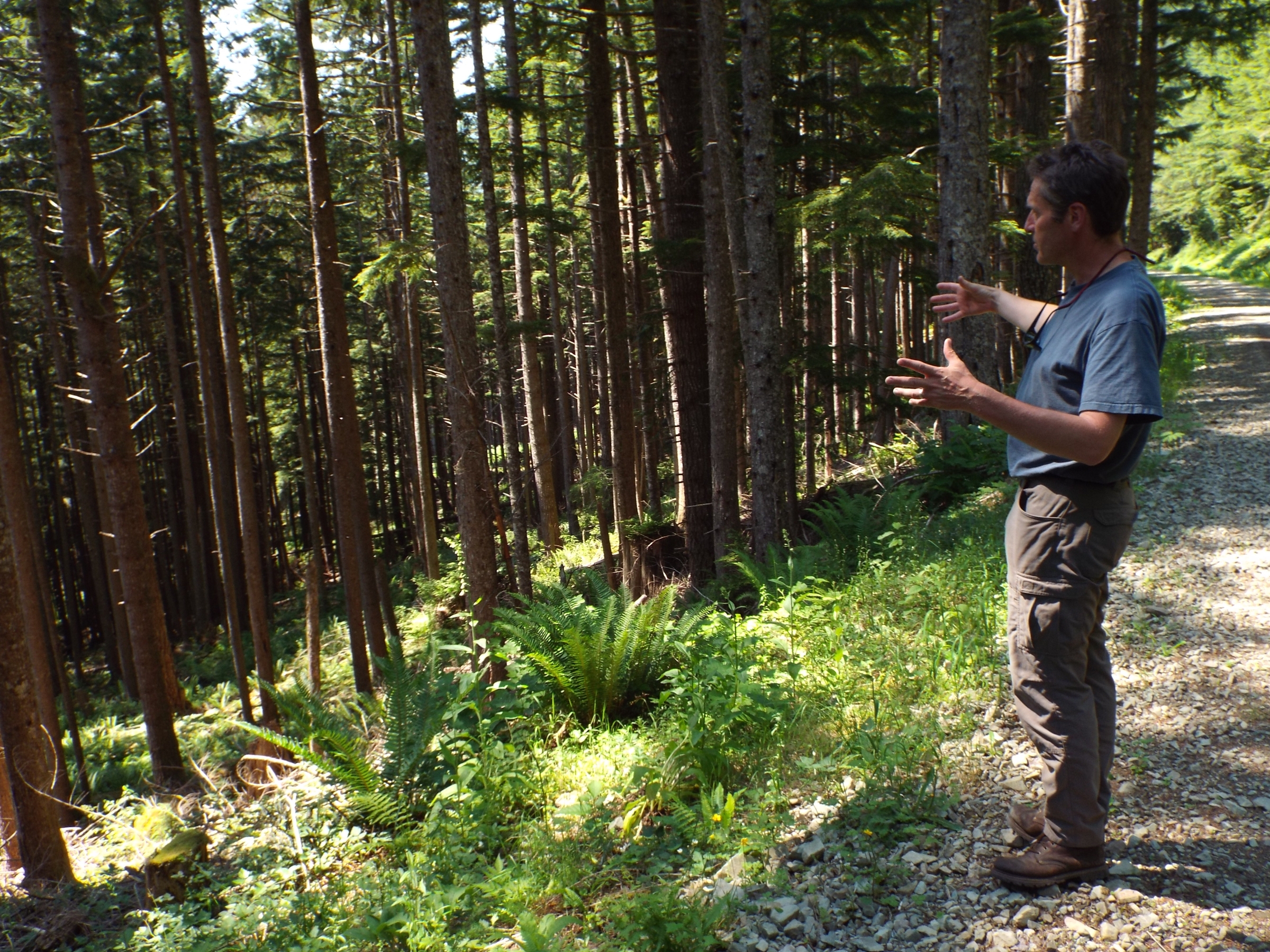 SAF member Rolf Gersonde, a forester with Seattle Public Utilities, talks about the “ecological thinning” that was conducted in this stand several years ago in the Cedar River Municipal Watershed. Photo Credit Andrea Watts.

“Overall, the stakeholders were appreciative of what we showed them,” Gersonde said, though some of the stakeholders had philosophical differences regarding the need for thinning. The ecological thinning also received support from an unlikely ally.

“The Sierra Club has the policy of not supporting any timber harvest on federal and public lands, but the local chapter actually has taken a stance apart from that policy and is supporting our program as being experimental and limited in scope, and not revenue-generating,” said Gersonde.

The Cedar River Municipal Watershed Upland Forest Habitat Restoration Strategic Plan outlines the forest management activities that will occur throughout the watershed. Although “this ties our hands in some ways to doing only a certain amount of activities every year,” Gersonde explains, “we have since asked the city council for a case-by-case ordinance for a specific project, but also asked for an ordinance to sell over 6 MBF over five years and to allocate that to certain areas that we specified, and that was approved as well. [This gives us] a little bit of flexibility for what we do, when we do it, and in what years.”

While the thinning operations don’t have revenue objectives, any profits that are realized are placed into SPU’s water fund to offset the cost of funding the HCP. Gersonde said that the cost of the HCP is actually going down. With 13 years having passed since the HCP’s beginning, some of the restoration-thinning programs are winding down in the younger stands, and the Forest Ecology Work Group is transitioning from strategic planning into implementing elements of the HCP, such as road decommissioning. Gersonde estimated that ten miles are being decommissioned each year. The roads being eliminated are those that models show as creating sedimentation problems or that are located in areas where logging won’t occur.

Because the HCP requires the creation of a late-successional forest from second growth, something that hasn’t been attempted before on such a large scale, Gersonde said they actively collaborate with the Washington State Department of Natural Resources, the US Forest Service, and the University of Washington on experimental silviculture prescriptions, such as variable density thinning, with the intention that these prescriptions could be implemented in other stands if proven successful. Collaboration also occurs with the Muckleshoot Indian Tribe by conducting projects that enhance cultural resources, such as huckleberries and wildlife habitat.

To measure the success of these thinning and habitat projects, roughly 100 permanent sample plots across the watershed have been established for collecting data on whether the silviculture prescriptions are working. Gersonde sees this data collection as making a difference in demonstrating to the public the success of their management efforts.

“We monitor our outcome. We don’t set up projects and walk away from them,” he said.

And while he knows this monitoring is worthwhile, it does take effort to include the monitoring expense within the watershed’s budget.

In spite of the watershed being closed to public access, there are opportunities for the public view the HCP in action, whether by visiting the Cedar River Watershed Education Center, joining public tours, or through school programs or field trips. There has been talk of allowing greater public access to the watershed, but that will be somewhere in the future, Gersonde said, as the maintenance of water quality, the security of the dam at Chester Morse Lake (the main water storage reservoir in the watershed), and the protection of the research installations would have to be addressed.

During his years of conducting outreach with the public, Gersonde has found that people have two misconceptions regarding forests.

“Sometimes people look at our programs [and] are actually astounded that there is a period of forest development that is not very diverse. The idea that if you just let the forest grow, it will grow to this [characteristic old growth] structure is just as misleading as well,” Gersonde said, adding that he appreciates “getting new ideas from people who think very different directions and not necessarily adhere to certain ideas or effects. To pick up new ideas and not stick with the old patterns, necessarily, or the paradigms we’ve always thought of. Because there are new ideas that we need [to] at least try out.”

Gersonde sees the future of management of the watershed as focusing on ensuring resiliency.

“Much of what we do is monitoring for forest health,” he said. “What we’ve come recently to look at is the question of whether or not the forest is resilient enough to retain its assumed trajectory of developing late-successional forest habitat.”

With resiliency in mind, Gersonde and his colleagues have initiated a trial planting of Douglas-fir whose seed source is from Oregon, far to the south, and planting Garry oak in the lower elevations of the watershed, a species likely present before fire was excluded from the landscape.

Doing more education about the breadth ecosystem services provided by the watershed, beyond just providing clean drinking water, is another aspect that Gersonde would like to focus on in the future. From this watershed, he said, society “derive[s] habitat values, carbon sequestration, cultural values. Those are nonexclusive benefits to society and I think we still have a long ways to go to explain to people that public management of these lands provides so much more to society beyond the immediate goods besides timber, water, wildlife.”